Well hey this is a pretty exciting article because it makes me go, “Oh wow, maybe I really can be a comedian!” Whoever wrote this (Debra Kessler) is pretty darn optimistic about the state of comedy. And I say, I say she’s convinced me. And also convinced me that I need Seeso.

Kessler actually wrote the article about the views of Brian Volk-Weiss, the President of Comedy Dynamics. But either way, I’m on board. Great read. I learned a lot. That’s all I’m gonna say.

One of my favorite comedians. His special came out (yesterday? two days ago? yes, two days ago) on Netflix and I watched the first 20 minutes or so last night before I fell asleep. How quickly I fell asleep was unrelated to the goodness of the special. However, I feel like I’ve seen him do better. On Joe Rogan’s podcast, I remembered him describing this as his “sweatiest” special, so you know he’s working hard. There was one bit I remember about how one time no one would let him into a particular hotel because he didn’t have his ID…something like “yes I’ve gone on TV with the alias Hannibal Buress just so I could check into this hotel.” I really liked that one. And hey, I haven’t seen the whole thing, so maybe the rest is absolutely fantastic and I’m being unfair.

This Splitsider interview came out a couple of days ago to promote the special. It’s about Buress and dealing with fame. It’s pretty fun.

Now here’s the trailer for the special. If my dumb blog post didn’t get you excited enough to head over to Netflix this will, probably. I’m not sure. Probably.

This past Friday, John Mulaney’s new special, The Comeback Kid came out on Netflix. What makes it cool is that it’s kind of like a small theater film. I really loved the intro to the special. Without ruining too much, the special was shot in Chicago and there are a bunch of artsy clips. I donno: It worked. I’m from Chicago too. I thought it was classy. And there was a talking dog. That’s hard to do.

The stand up itself was good: I’ve heard some of the jokes before, but hey that happens. He closed on ten minutes about when he met Bill Clinton, which is a great joke. It’s also why he titled the special the way he did: you’ll see. I also think it’s sort of his comeback to stand up comedy after his television show was taken off the air.

If you’re like “whoa I need more convincing,” here’s an article about the special. Check it out on Netflix!

If you don’t know Anthony Jeselnik, you might know the witty asshole who hosted this past season of Last Comic Standing. That’s Anthony Jeselnik. He was also the creator and star of the show The Jeselnik Offensive.

If you love “I can’t believe he just said that” humor, you’ll love Jeselnik. He’s absurdly taboo. He makes Joan Rivers look like a sweet old grandmother. Speaking of which, he probably has jokes about Joan Rivers dying. Rape, abuse, cancer – it’s all in his sets. He’s the worst nightmare of the FCC.

To give you a little taste of what he’s all about, this is what Jeselnik tweeted on the day of the Boston Marathon bombing: 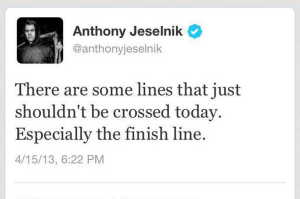 Here’s the trailer for the special’s release on Netflix. It’s called Anthony Jeselnik: Thoughts and Prayers. In this interview, Jeselnik describes his Netflix special as “the darkest thing I’ve ever done.”

If you only want me to remind you every once in a while that my blog exists, please subscribe to my email list by CLICKING HERE. These emails are works of art in their own right. Although they're more like pasta art.
Join 2,681 other subscribers