Yeah, so, as implied by the title I have seen a ton of lists out there chronicling the “whatever-est” comedy “whatevers” of 2015.

1. The Best and Most Interesting TV Comedy from 2015 – Splitsider

Covers some of my favorite shows out there, including Master of None, Bojack Horseman, and W/ Bob & David.

I must admit, quite embarrassingly, that my comedy book game is pitifully weak. I’m not really a reader. “Then why do you write stuff that people have to read? You hypocrite!” Yes, well that.

I haven’t read any of these books, but I’d like to. To my credit, I have read many of the older “classic” comedy books. But when it comes to new stuff, I guess you’ll have to trust Splitsider.

3. The Clubs Speak! The Best Stand Up Comedy Moments of 2015! – The Interrobang

If you like hearing comedy club owners and managers bragging about all the stuff that happened at their clubs this year, you’ll find reading this article to be a rewarding use of time.

It’s actually a lot of fun to hear about some of the people and clubs I know about and go “oh yeah!” And if you’re a real comedy nerd you’ll do a lot of “wow I didn’t know that happened”ing. 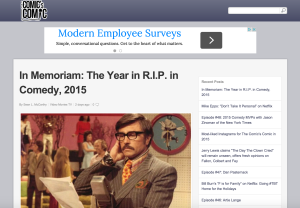 Well, this is a rather morose one. It’s a very extensive list and I actually only recognized a hand full of the names. A couple I recognized as established members of the San Francisco and NYC comedy scenes. Sad stuff.

A happy note: I learned how to spell memoriam correctly. 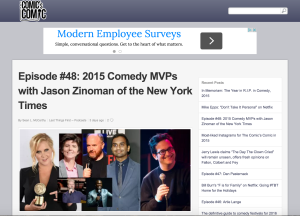 Didn’t get to listen to this whole podcast, but I thought it was a really good little description and it pulled me in right away. Who deserves to be “the comedian of the year?” What does that question mean? Fascinating stuff. 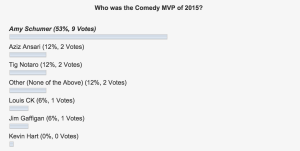 Also, If 17 votes means anything, Amy Schumer wins. They had a fun little poll.

QUITE the niche audience for this one. I’ll allow the audience to look for themselves. I put it in cuz I think it’s funny.

I’m pretty sure everyone on The Laugh Button staff wanted to write a 2015 article this year. Prepare for the overload.

I really don’t get the capitalization scheme these people use in their titles (in case you’re wondering, I always capitalize every word BECAUSE I CAN). I recognized Monroe Martin form Last Comic Standing. And he’s around NYC everywhere. But I didn’t know the others. Some were pretty good! 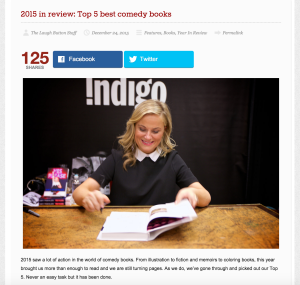 If you don’t trust Splitsider on those books or if you just want to look at five of something, you might like this one.

If you only want me to remind you every once in a while that my blog exists, please subscribe to my email list by CLICKING HERE. These emails are works of art in their own right. Although they're more like pasta art.