Open mic comics are on the go. They don’t have money. Or time. Here are some cheats.

Locate your go-to bodegas. What’s a bodega? Whoa, you must not be a New York comic. Lower East Side, Long Island City, The Village, your neighborhood in Bushwick or Astoria: know where the 24-hour shops are, especially the cheap ones. You’ll be gone all night, so if you miss dinner and you’re hungry you want to know where a cheap sandwich will be waiting for you.

Some bodegas are only good for certain things. If a bodega charges more than $1 for a soda can, you’re entitled to outrage. Of the internal nature. Or, if you’re more of a New Yorker than I am, go ahead and yell away. Even if it’s just $1.25.

Hey, even if they charge too much for soda, the place still might not be worthless. Check out the candy, the bread, the individually sold boiled eggs. Hell, I have a bodega that I use exclusively for my seaweed fix.

Check to see if they have Arizona iced tea. At $1 and 23 fluid ounces it’s the most sugary deliciousness per dollar you can find and they can’t charge you more. It says 99 cents on the can. ON THE CAN! Get the diet peach or ginseng. Why? Because you’re not a friggin’ fatty! You don’t have time to work out! Stay focused! And because, remember, you still have to grab a 50 cent frozen snickers bar on your way out. Heaven in a wrapper, without the religious mumbo-jumbo.

Delis are good too. But they like to charge extra for grabbing a piece of meat from a refrigerator with a window and throwing it onto a machine that cuts it for them. Why don’t you just get the meat to go? Buy some bread and some mustard and you’re there. Where? Sandwich town. If only that place were real.

What sandwiches do you get when you’re forced to get one on the go? Switch it up. Don’t be boring. There’s research that says if you try new stuff, you’ll be happier. The Reuben is a great staple, but that can destroy your breath and your ability to make new friends. And you weren’t very good at that in the first place: you’re a comic.

Try something you normally wouldn’t have. Save your favorites as a reward after a good set. Write a joke while you’re waiting.

Carry some cash. You don’t want to be forced to spend more than $10 to use your credit card. Or go to the non-Bank-of-America ATM that charges you $3. And you might need it to pay for a mic. Or a tip.

Oh and tip sometimes, because you’re a good person.

Where do I find other good food stops? ASK OTHER COMICS. Trade your favorite locations. Who knows, one of your comic friends might work at the best burger joint in town and can get you a tasty discount every single time you swing by.

Go to buffets and anywhere else where you pay by pound. Just don’t get too excited and get more than you need.

Try food carts, especially shawarma. Know what shawarma is. They typically want $6 or $7, but you can usually get it for $5 if you ask how much and then walk away. Especially if it’s your first time at the cart.

Also, check out the tortas.

Grocery shopping. Do that. Even if you suck at cooking.

Buy lots of rice. A lot. Like so much. And pasta. It goes with everything. You don’t really need tomato sauce. You can buy a bunch of tomatoes, put them in a pot with some hot sauce and oregano and it’s better.

What to spend money on: spices, yogurt, and meat. Try all the spices. Put cereal on yogurt with some cinnamon and honey and you’ve equaled the deliciousness of the snickers bar. You can almost convince yourself the yogurt is healthy enough to make up for the snickers you already ate today.

But, seriously, get eggs. They go with everything and you can have them any way you want, and no matter what they’re into it. Have them sunny side up, boiled, poached, scrambled, omeletted.

Interact with the people working at your grocery store as often as possible. Eventually, a 70-year-old Polish woman will make a suggestive comment to you. You’ll try to write a joke about it. And you’ll fail. Write a joke about the apples instead. It’ll work better for some reason.

Check out what vegetables are the cheapest per pound, throw that in a pan. Boom, nutrition. I like yellow squash. “Like.”

Try weird things. Look What I made: 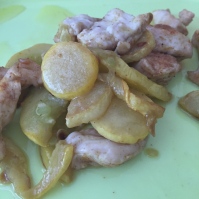 I invented that stuff. Whatever, no big deal.

Cook in bulk, like 4-5 meals at a time. Put them in a plastic thing and reheat tomorrow. Wow, that was fast: you’re brilliant and you’re a very funny person. Keep up the good work.

Find the best $1 pizza places. Let me save you some time: Two Bros. And then a hand full of other ones are good too. Get two slices and a Dr. Pepper for $2.75 and a cheap filler. Diet of course, you’re not a pig.

Find the best delivery deals. There are many different delivery services and they all usually offer some ridiculous first-time purchase deal like 50% off or $10 off. Order like three days worth of food for $20 and pay $10. Free delivery. It’s good for at work or if you’re home most of the day. Do the pick up option for your daily exercise. Ha! Who are we kidding.

There are also crazy people online who post coupon codes. And they work. Love me some crazy deals.

Know where they have reasonable priced lox bagels. With cream cheese and capers and onions. Yum.

Be a girl, or have friends who are girls. Buy some drinks at an empty bar and hope they bring you crepes. This happened once.

What you can have in the club. There’s usually ice water there, so bring a water bottle. And depending on the place, maybe you can grab some free popcorn or nuts or something. Buy some food there sometimes. It’s a nice thing to do. Also, drinks. Tip!

Just remember that if you buy and eat too much, you can write more jokes about being broke and fat. So even if you don’t eat well, you’ll be just fine!

One thought on “How To Eat Like An Open Mic Comic”

If you only want me to remind you every once in a while that my blog exists, please subscribe to my email list by CLICKING HERE. These emails are works of art in their own right. Although they're more like pasta art.
Join 2,681 other subscribers